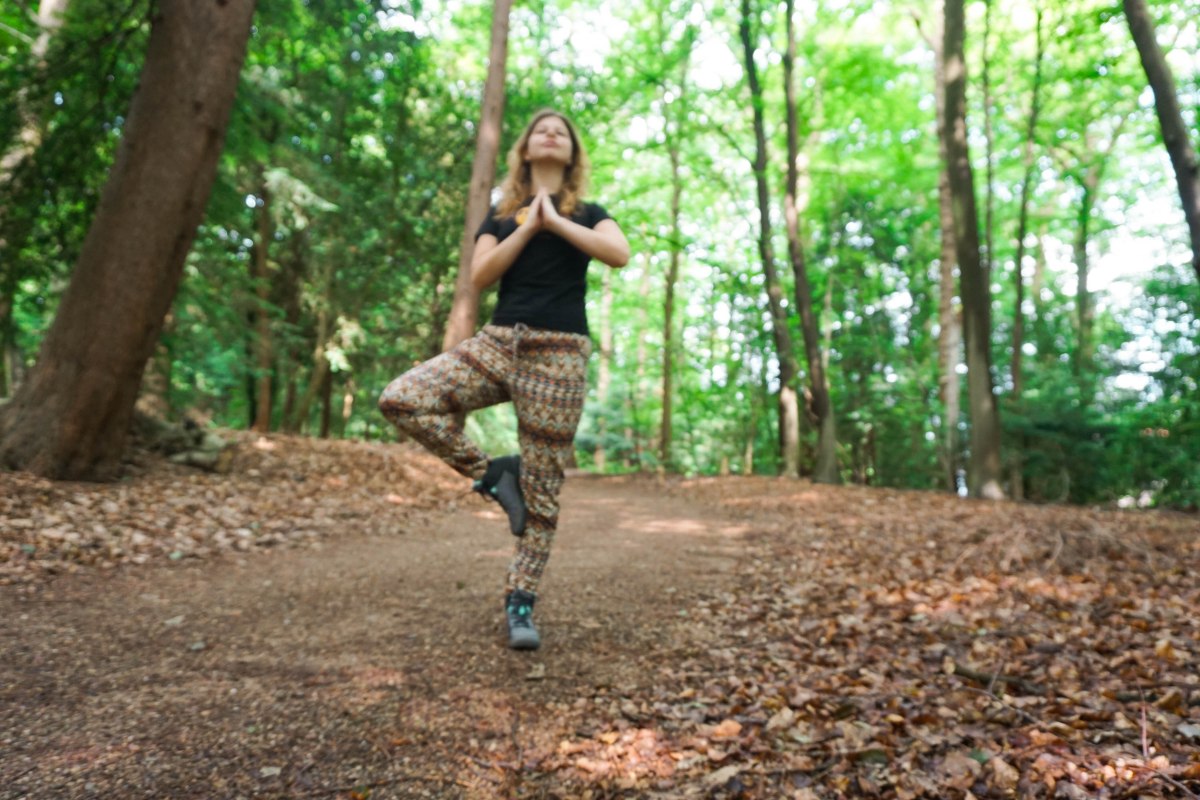 There are some things you keep coming across, be it on the internet or somewhere else. For me, one of those things is a yoga retreat. I saw pictures of it everywhere, of extremely flexible people doing yoga on sunny beaches, in the middle of a forest or other amazing looking places. A retreat sounded heavenly to me; being on an exotic location, having time for yourself, doing yoga, eating healthy, and especially since reading Eat, Pray, Love, I knew this was something I wanted to do.

Flying to the other side of the planet, on my own, to do something I think I liked but wasn’t really too sure about, was too big a step for me. I figured, why not try it first in my own country? If I don’t like it, I can just go home, and if I do, I can always go further away in non-covid times. When I read in a magazine about Happy Soul Travel, I was in, and it didn’t take long for me to book the yoga retreat.

I had booked a weekend in January, as a fresh start to a new year, but thanks to covid it got postponed again and again. Until June, when we were finally allowed to go. So I went. Butterflies and a little bit of predetox-hunger in my stomach, I went on my way.

The location was the Hoorneboeg in Hilversum, a city between Amsterdam and Utrecht, only 45 minutes from my house. It was an old farm located in the middle of a forest and it was absolutely beautiful.

It was the perfect place to relax, with comfy couches and a beautiful garden filled with wildflowers. The purpose of the weekend was yoga/detox and taking time for yourself. To heal, to rest, to relax, whatever you felt like. Taking a break from daily life and focusing on whatever you wanted. The location was perfect for it. Besides meals and yoga, there was free time to read, you could take a walk in the forest, there was a sauna and they offered massages.

We started our mornings in silence, which was amazing. You could just take your time, get something to drink and do what you wanted before it was time for yoga. No obligatory chatter or meaningless conversation, just silence and time to wake up. I spent this time mostly drinking tea and journaling, others wanted to stay in bed for a little longer or went for a run. Like I said, you could do whatever you felt like.

Then it was time for meditation and yoga. Our yoga teacher Thirza started the day in silent meditation and then we did yoga. I’m used to doing yoga for half an hour, watching videos at home by Yoga with Adriene but here the sessions (meditation and yoga) took an hour and a half! It was something else, but it was really nice and a great way to start the day, wake up your mind and your body and be ready for whatever comes your way. I really liked Thirza’s teaching and she had such a nice voice. If I’m gonna book another yoga retreat, I’m sure to look for one where she’s the teacher again.

The yoga studio was this big, well-lit room thanks to it’s big windows that looked into the garden. I would love having such a room in my own house!

We did yoga twice a day, in the morning to wake up and then another hour and a half at night we did Yin Yoga, which was new. We also did Yoga Nidra one night which was absolutely wonderful. It was a sort of guided meditation and it made me feel all woolly and happy and I went to bed immediately after and have never slept so good.

My primary focus this weekend was yoga and spending some time with myself. There was, however, another element and that was food. The people around me know I am a very picky eater and I’m like an opposite foodie. So this was the part I struggled most with. But I wanted to commit myself to the entire weekend and try new things. So I did.

We did a predetox before the weekend started, cutting back on meat, alcohol, sugar, coffee and such. For me it mostly meant cutting back on cheese (the horror!) I had a piece of fruit for breakfast, soup/salad for lunch and a light meal of steamed vegetables for dinner. Nothing too weird, just eating healthy. I’ve gotta admit that it went better than I thought. Some meals I tried were really gross (broccoli soup, yuck!) but I liked having fruit for breakfast and felt that eating so much veggies helped me being more energetic. Who knew!

In the weekend we continued this and the mealplanning looked the same each day. A glass of warm water with lemon when you woke up to spice up your digestion (it kinda tasted like cleaning agent so I skipped it after the first day), a breakfast smoothie after yoga (which was also not really my thing, it had celery, ginger, cucumber, parsley, pineapple and lemon), a piece of fruit in between, then soup and salad for lunch (which were good!) another smoothie in between and then another soup for dinner. It wasn’t a lot of food but somehow it was enough for me. I had brought some apples myself for if I got hungry but I didn’t need them.

We also had some ‘detox talks’ where they talked to us about what kind of food is good for you and what is bad. They also pointed out that this weekend was a detox and that they were not advocating us eating like this every day. It was just to clean the body, but after the retreat we should do a ‘retox’ to start eating carbs and proteins again.

The detox wasn’t really my thing. I learned a lot, and also lost 1,5 kg in a week, so that was nice, but it wasn’t for me. I’m glad I tried it, because I felt more energetic and healthier, but I found that I was also obsessing over junkfood. We had some conversations where we had to think about what we wanted in life, sort of like Lucifer ‘what is your biggest desire’ and all I could think about was pizza. Needless to say, I immediately ordered a pizza when I got home (and chicken wings, and a cookie and a milkshake, but who’s counting calories?).

Overall I had a great weekend. I’m certainly glad I did this and I might even book another yoga retreat in the future. The waking up in silence, the meditating and yoga but also being able to do whatever you felt like, was really nice. I had a walk in the forest, went to the sauna, did some reading and a lot of thinking. The detox part wasn’t really for me but I did learn a few things. And there is no way to appreciate a good pizza better if you haven’t had cheese, sugar or carbs in a week!